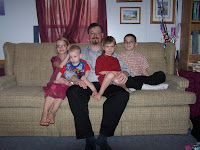 I cut Scott’s and the kids hair today. No, I didn’t get two bits for it. But I did think about it. This picture shows them all after their haircuts.

I started with Hannah’s hair. It is hard to get her bangs straight, since she doesn’t sit still very well. I used to try keeping a hair band in her hair and I hoped that she would eventually have her hair long enough to stay behind her ears, but the hair band would get lost and her hair wasn’t staying out of her face at all. So out came the scissors. It’s nice seeing her eyes.

After Hannah’s hair cut, I cute Joshua’s. His is the easiest hair to cut. I just use the razor with a fairly short guide and shave it all over the same length.

Then I cut Scott’s hair. His is the most stressful. He likes his hair a certain way, but he’s not sure what that way is. I know that he doesn’t want it sticking up anywhere. He has very straight hair and it has specific calic spots. Which makes his hair rather difficult to work with. It turned out pretty good though and he seemed pleased with it. He’s definitely pleased with the price, he doesn’t complain nearly as much after I cut his hair, than with someone professional that he has to pay.

After Scott’s hair, I cut Jonathan’s hair. This was his first real haircut. We had tried to cut his hair before while he was asleep but it wasn’t a very good one. This time I took him to the bathroom and stood him in front of the bathroom mirror. I showed him the electric hair shaver that I was going to use. I turned it on for him and let him hold it. I wanted him to get used to the sound and not be afraid of it. Then I turned it off and brushed his hair with the comb of the razor. Then I showed it to him again and turned it on for him again. Once he was used to it, he started playing with some of the combs I had set on the counter top. That was when I started cutting his hair. He didn’t mind at all. I kept talking real cheerfully with him about how pretty his hair looked. I think hearing me praising his haircut and having seen that the razor wasn’t going to hurt him, he wasn’t scared and didn’t mind. 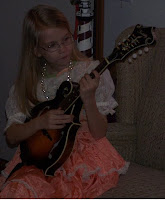 Scott took Ruth with him to a Mission Rally today. I chose to stay home with the younger two kids and Scott gave Joshua and Ruth the choice to stay with me or to go with him. It was going to be a pretty long evening, since Scott was going early to play some music with another man from the church there. I didn’t know what there would be for Hannah and Jonathan to do. They would get bored and 4 hours of trying to keep them out of trouble sounded tiring. Ruth brought her mandolin along. She also brought her book with her in case she got tired of playing and wanted to read. She had a good time.

Our kids are growing up so fast. God has richly blessed me with a wonderful family.