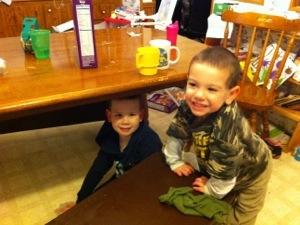 We are coming upon the end of our second week of 2013. Quite often you can know at the end of a month whether the goals you set were reasonable or not.

I feel pretty good about our goals this year. One great thing is I’ve been meeting my goal of waking up earlier in the mornings. I’ll be posting more on that in future posts.

Today I want to tell you about our housekeeping goals. I have a goal this year to never leave dishes in the sink. There were many nights in 2012 that I sighed and left the dishes to be done the next morning. That is because I had a chore assignment fail between 2011 and 2012.

Yes, it was pretty sad.

Let me tell you what happened. 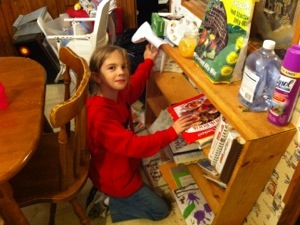 I have tried so many things these past couple of years with chores. We do pretty good when we’re in a good routine that works but when something breaks the routine sometimes it turns crazy. In 2011 we tried assigning each child monthly chores and paying them an allowance. That did not work!

The problem I had with paying them an allowance was that they took so long to get the job done. Then if there was a dirty job they didn’t want to do, it wound up set aside for the next month’s switch. Which meant that just made that chore yuckier for the next child assigned to it.

It was also hard to judge how much to pay our children because they preferred not working more than money. I also felt if I helped them by doing their assigned chore they were only learning that  someone else will do it for them.

It is a lot easier to maintain cleanliness than to catch up on it. 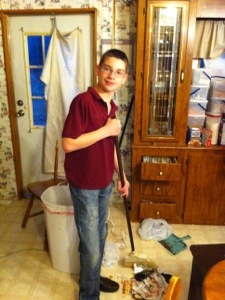 This past year (2012)  I had a hard time getting caught up. I felt I was constantly washing dishes. I’m faster at the dishes than the children and more thorough. So I had my kids doing other odd jobs around the house or working on their lessons while I did dishes.

My husband was very sweet and started trying to help me with dishes as well. He was seeing the effort I put toward getting things caught up around the house.

Two weeks into the new year and things are going well. I’m determined that my goal of having a clean house is higher priority than even my writing goals.

The clothes issue is another matter.

We have too many clothes. We are given quite a bit of hand-me-down clothes which isn’t the problem. The problem is we’re not getting rid of the outgrown clothes quick enough.

Then it becomes a mess because the kids don’t have a place to put it all. It gets left on their floor along with dirty clothes. Well, you can probably imagine how their rooms looked. Picture 6 kids in 2 small bedrooms. Scary!

My husband had 2 weeks off during the Christmas break. One of those weeks he took and bagged up the trash and hidden toys in their rooms and kept the laundry running with clothes.

I had the kids helping me sort through those clothes as soon as they came out of the dryer.

We’re not finished with that project yet but basically I am having them pick only a certain number of clothes to keep. The rest we need to get rid of. So far besides what my husband has already taken away, I have two large garbage bags of clothes waiting in the van to be given away.

My husband told them that he will be doing weekly checks on their rooms at random to ensure they keep them picked up. Anything he finds on their floor or out of place will be thrown away. He gave them a warning to look in their rooms yesterday and tell him what they would be losing if he were to check them right then. They had a few things they would have lost but I think they are taking him seriously.

I have simplified our kitchen routine this year. We no longer leave the kitchen for one or two people to clean. I assigned the two younger boys to wipe the benches and the floor. (They tend to cause the most spills.) We don’t let those spills set around for someone else to clean up anymore.

I assigned my 7 year old daughter the task of clearing and wiping the table. She can reach everything on the table and is able to put things where they go. In the picture I also have her straightening the cookbook shelf.

My 12 year old daughter is very good at organizing. I usually have her dry and put away the dishes that I wash.

That’s our new after-meal routine. I must say that so far it’s been working. I no longer have to stay up late doing dishes. Nor do I have to sigh and decide to leave the dishes for the next day.

I found that by my being in the room washing the dishes while they do their tasks keeps them from getting distracted. We now get the kitchen completely cleaned in a matter of minutes.

That is much better than the whole day it use to take.

How about your home? Are there chores that your family struggles with? Do you have any housekeeping tips that might help us out?  Please share in the comments section.

Hopefully I’ll be having a success story about our laundry woes soon. Stay tuned by subscribing to my email updates. That way you won’t miss a single post.

I’m also linking up with some other Mommies today at

If you want to read some other Mommies perspectives on Thriving at home, check it out.