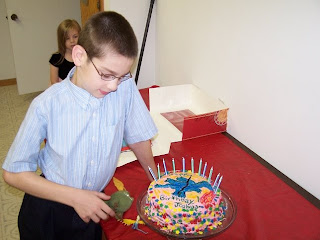 I got an e’mail from Scott saying that he arrived in Taipei, China. If I have the times figured that means he should be arriving in Bangkok right about the time I’m writing this. It would be really nice if he could e’mail me from there.

The kids and I finally arrived at my parents house this evening. It took us far longer than I had planned to get everything packed. I was hoping to get to visit my sister today but we left so late that I decided to go straight to my parents and visit my sister and her husband on another day.

Tomorrow we will be going to visit my grandparents in Henderson. I think we’re planning to possibly visit Canton on Saturday on our way home from Henderson. I have never been to Canton for their trade days. I’ve always heard really neat things about it, and seen things people have bought from Canton but I’ve never experienced it personally. I’m looking forward to that. I think the kids will have fun with there as well.

Joshua’s birthday was Sunday. Joshua wanted a chocolate cake with strawberry icing. But he didn’t want it to look girly so I tried to decorate it so that it didn’t look too pink. He was quite pleased with how it turned out. We had a party for him and another boy in our church whose birthday is 3 days after Joshua’s. They both turned 12 this year.

After church Sunday we had hot dogs, chips, cake, and ice cream for anyone that would stay and celebrate the boys birthdays. They both had their own cake and candles. Then after eating we passed out water guns to all the children that came. There were 10 children present at church that day. A few of the children stayed and played with the water guns outside. He told us that evening that his birthday turned out a lot better than he thought it would. I’m glad he had fun. It’s hard to believe he’s already 12. It won’t be long and he’ll be driving.

Then to think that when Elijah turns 12, Joshua will be turning 24. I’m not even going to think about how old I’ll be when Joshua turns 24.

I plan to cherish these years while my children are young. They grow up so fast.