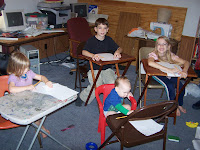 I took this picture a couple of weeks ago of the kids sitting at their desks ready for a lesson. After they are done with their lessons we fold up their desks and put them up against the wall and clean the floor of all toys, DVD, tapes, games, etc. that gets scattered during lessons. At around 3:30 I let the kids take a snack, usually an orange outside and they play. 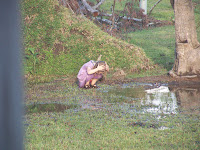 This second picture is of Hannah “washing” her hair in a puddle, one of the days they were outside playing. She can be quite interesting actually. Everyone says she’s our character, and that she is. She is always asking people for gum, a habit she has that I wish I could figure out how to break. The problem is that she always asks so sweetly that everyone wants to give it to her. They then promise to bring her gum in the future. Now how do I convince her to quit asking for gum when she gets it so easily. Well, that’s a problem I’ve been talking to her about. I may have to ban gum altogether until we get the problem solved. Of course then she’ll find something else to ask for.
I hadn’t been online in so long that I felt I just had to get these pictures on here and update everyone. Later I will try to put more pictures on here and tell about Thanksgiving and our Christmas and New Year plans.
Like