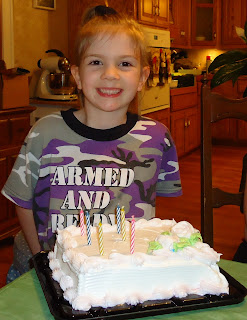 She has been asking us questions about how to be saved for quite a while now.    When she asked the questions before she never seemed to care to go any further with it.  We don’t believe in pressuring our children to be saved but we don’t hide the good news from them either.  We make sure that they realize that they are sinners and that sin is the bad things we do.  We tell them that one day when they feel bad for those bad things they do, that God wants to forgive them.

In the earlier years when Hannah would ask about being saved, it was just something she wanted to do to be like her older siblings that were saved.   In her mind it was a club she wanted to join.  The thing she was lacking was the conviction of her sins.  She knew she did bad things but she didn’t feel any guilt about it.  At that time, I told her that God knew that she wanted to be saved and would protect her until the day that she understood. 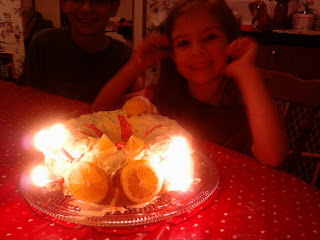 Well, today was that day.  In Sunday School she asked me about being saved.  I explained the same thing I had explained to her before.  I told her that she first had to realize that she was a sinner, and that she did bad things, such as lying, disobeying parents, etc.  She agreed.  I told her that it wasn’t enough just to realize that but you have to feel bad for those things that you do wrong and realize that God isn’t happy with those bad things.  I asked her if she ever felt bad when she did something wrong.  She told me that she did.
Then I told her that what she needed to do was tell God that she was sorry and really mean it.  She said that she didn’t want to pray with other people in the room. She said that it would be embarrasing.  I told her that she could pray anywhere.  Then she was confused as to when she wanted to pray to be saved.  She told me that she wanted to be saved next Saturday before karate class.  Then she changed it to Monday.
I told her that she could be saved anytime and any place.  I told her that God could hear her anywhere.  I then read her  2 Corinthians 6:2 (For he saith, I have heard thee in a time accepted, and in the day of salvation have I succoured thee: behold, now is the accepted time; behold, now is the day of salvation.) 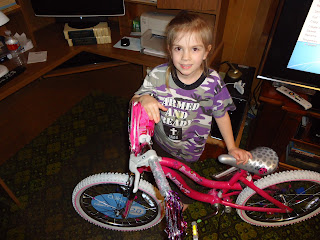 I then asked her when was a good time to be saved.  She said, “Saturday?”  I decided she needed to hear the verse again.  Then she said, “Oh, NOW! I guess since the Bible says it, I should be saved today then!”

I then asked her if she wanted me to show her some of the verses that tell about being saved.  She agreed and I started with Romans 3:23.  She then said, “Oh, is this what Daddy did when he talked to the other girl about how to be saved.”   I told her it was, and I asked her if she would like Daddy to show her the verses about being saved.  She said an excited yes.  And we went on with our lesson about Jesus telling his disciples to let the little children come to him.  It was a fitting lesson.

Then tonight after we prayed our bedtime prayers as a family, I asked Hannah if she wanted to talk to Daddy and she said that she did.  So Scott took her into the other room and shared with her a few verses.  He said that she understood it all completely.  In fact she told him how to be saved!  He told her about how we can’t get to heaven by the things we do and and she told him, “Yes, I know that Jesus died for my sins and that the only way we can go to heaven is by asking Him, and He sees me! I don’t know how He sees me but He sees everything! and He was with you when you were in Paraguay and when you were in Thailand and He was with us here!”

Then she wanted to be alone while she prayed.  So Scott stepped out of the room and told me about their conversation.  Then she came skipping out of our room and said, “I did it!”  We asked her if she asked Jesus to save her and she said that she did.  She was going to skip right off to bed but we stopped her for a hug.  She is now a new creature.  Now we will get to enjoy watching her grow as a new child in Christ.  What a wonderful thing that is.  After a child is saved they have a new purpose in life and it’s an exciting adventure to watch.  I love my children and I’ll be praying for Jonathan who I’m sure will be ready in about 3 years.  It seems that is the age in our family that our children start really understanding how to be saved.  I will be praying for Jonathan and Elijah that they will be saved at an early age as well.  I couldn’t ask for a better blessing than to see my children follow Him.   God is so good!

One Reply to “Two Birthdays!!!”