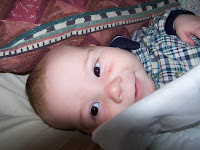 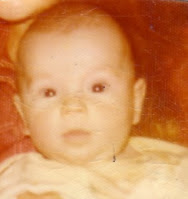 Jonathan turned 4 months old yesterday. I wanted to post a video I took of him but dial-up would not allow it. So I decided to just post some pictures today. The first one is the only baby picture we have of Scott. I’m not sure how old he is exactly but I’m guessing he is at least 3 months maybe 4 months. I am guessing that age because of how well he is holding his head up. If he were younger, his mom would have been holding him differently. So i think that is about his age. I am also putting on here a picture of Jonathan. I thought it was neat to see their resemblances. I need to get a good baby picture of me on our computer. Sometime I’ll try to put pictures of all 6 of us at about the same age. So stay tuned for more pictures. 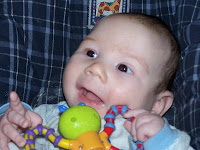 And as soon as I get batteries in my camera, I’ll take a better recent picture of Jonathan. The top picture was taken yesterday and the bottom picture was taken in January. Sadly I didn’t take any digital pictures in February. But I do have some film that needs to be developed. So I’ll eventually scan those pictures of our Zoo field trip onto our computer. I know everyone will be waiting in anticipation now. So I will definitely blog again soon.