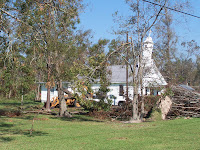 Here is a picture as promised of some of the damage caused by Hurricane Ike. In this picture you can see a tree down, the church’s steeple twisted and moved, the power line is down, and there was a stick impressively harpooned into the ground. Yes, those are the trees roots you see. It’s amazing how much damage can be done by a hurricane. We have other more detailed pictures of some of the damages but I thought this one made an impressive over all view of the damages.

We stayed with my parents for 2 weeks. When we arrived home we had to find a way to park in our front yard. The entire yard was covered with branches. We came home expecting the power to be out for only a couple of days, it turned out being closer to a week and a half. We were really happy when the electric company finally showed up in our front yard. It’s funny how much you appreciate something after you have been without it for awhile. We really appreciate electricity having gone that long without it.

The kids are doing well. We were doing our lessons over at the church during the week that we didn’t have electricity. We would go over there for breakfast and then I would get the older involved with a lesson, while I figured out what to do with the younger two. It was fine but it is a lot easier to keep them out of trouble in our own house.

It amazes me how much there was for my 3 year old to displace. I walked into a room to get something and saw a large stack of books where she cleared the bottom two bookshelves that she could reach. I, of course, commanded that she put those back on the shelf neatly. Later I found half the church sign numbers moved and set messily on another table. I told her to put those back and she said, “O.k. I’ll put my money back.” Then on another occasion she had pulled all the coffee cup holders out of one of the kitchen cabinets and piled them on a table. I first turned it into a lesson for her by having her separate the cups by colors and then count how many cups of each color there were. Then I had her put them back. That was only some of the things she found to unorganized.

I have a lot to do this month. I plan to put some of the things the kids are doing in homeschool next time I write. We’ve been pretty busy. I’ll try to get some pictures of them doing some of their lessons. Until then…