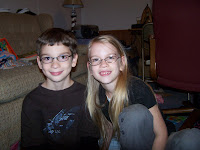 It has been almost a month since I’ve blogged. I have a lot of catching up to do. Since I’ve last written Joshua and Ruth both have new glasses.
Joshua does not have to wear his all the time but Ruth does. Of course Joshua has to put them on, when I insist that he gets his glasses instead of guessing at the writing on the white board or the T.V. screen.
Ruth has astigmatism, which the optometrist said she will need to wear her glasses all the time. She doesn’t seem to mind though, especially since we made sure she picked a pair of glasses that she likes and look nice on her. She really wanted her glasses to be pink like mine.
Their lessons have actually shown some improvement since we’ve gotten their glasses. Whenever I see Joshua staring at something funny, I just send him to get his glasses and he seems to not have such a problem. It has helped him with the tired look that he often would get in his eyes.
Of course we “had” to get Hannah a pair of sun glasses as well. She went with us to Ruth’s eye appointment. She felt like she needed her eyes checked also. So after Ruth picked out her glasses, we took Hannah over to the sunglasses section of Wal-mart and found her a pair of lightly tinted glasses. They look like sunglasses but they are not as dark as real sunglasses would be. They just have a pink tint to them. She was real proud of them. Jonathan just seems happy that he has so many people to pull glasses off of now. Whenever he gets a hold of Hannah’s sunglasses he tries to put them on his head. He loves to copy.
Jonathan is getting big. He is almost walking. He will stand up in the middle of the floor without holding on to anything. We haven’t been able to get him to take a first step, but I just know he will soon. I took a wonderful video of him playing with the his older siblings. Hannah was throwing a soft toy around the room and all of us would tell him, “Go get it!” He crawled across the floor grab the toy that she threw and then threw it for her to catch. Whenever he didn’t see where she threw it, we would point to it and tell him, “It’s over there.” He learned a new word. As soon as she would throw it, he pointed and said “Tha” for “There.” It’s hard to believe that he is growing so fast. He will be a year old soon. It doesn’t seem like a year has had time to pass. So much has happened this past year. I guess we’ve been so busy.
Hannah has been learning lessons as well. Her biggest lesson which I think she has finally begun to learn is to not lie. One of her incidences where we caught her in a lie, involved a chair that she obviously wrote on. I asked her “Hannah did you write on this chair?” She said “No.” When I asked her “Who did?” She said, “Them in France did it.” Hmmm… Her cousins sure would have
had to travel an awful long way to write on one of our chairs.
That is one of the lessons we try to teach our children at an early age. They get in far worse trouble for lying about a deed than they would have if they had told the truth. Hannah has figured that out and almost always tells the truth instantly now. Of course, now she tells the truth almost as if she were proud of the fact that she did it. But she gets into far less trouble that way.
He that speaketh truth sheweth forth righteousness: but a false witness deceit. There is that speaketh like the piercings of a sword: but the tongue of the wise is health. The lip of truth shall be established for ever: but a lying tongue is but for a moment. Deceit is in the heart of them that imagine evil: but to the counsellors of peace is joy. There shall no evil happen to the just: but the wicked shall be filled with mischief. Lying lips are abomination to the LORD: but they that deal truly are his delight.
(Proverbs 12:17-22)
Like