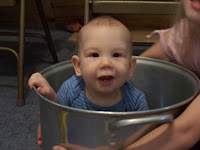 I had to post this picture of Jonathan in a big pot. This was a pot Scott had bought when Joshua was just a baby. He liked it’s size, because you could cook a lot of food in it. It was funny when he bought it, since Joshua was just a baby he joked that he would fit in it. Of course, we would never really cook our children.
Scott and I had a real good discussion on that subject before we were married. He had studied Deuteronomy 28:56-58 in seminary, also 2 Kings 6:28-29. It is funny to look at that conversation that we had 12 years ago. I remember it started when we both saw a teenager steal a cookie from the bakery of the grocery store we both worked at. I was shocked to see him do such a thing in plain sight, and just before I let the words out, Scott said, “Don’t say you wouldn’t do that.” I was even more shocked that he would think, I would be low enough to steal a cookie. That of course got into a big discourse over the fact that I would not steal a cookie. He then told me about the women in the Bible that were so hungry that they ate their own children. I was shocked to even have that brought up, I told him that I would never eat my children. I would give my own fingers and toes rather than eat any of my own children. The funny thing is we both agreed, but we saw things in a different way. He thought I was saying that I wasn’t capable of sin. I thought he was saying that I can’t say I wouldn’t do anything like that. I firmly believed that if you follow the Bible and stay within those guidelines and you will never have to eat your children, because God will provide all your needs. After the strangest argument we have ever had, we both agreed that we were sinners and that we didn’t have to eat our children.
Of course, we still have to joke about our first argument, and when he bought that large pot, I just shook my head and reassured Joshua at the time that we would never eat our children. Of course, now Jonathan fits in it and thinks it’s the funnest toy around. His brother and sisters all had him in there and were adding toys and pushing him around the carpet like he were in a car. He just loves it. Hannah uses that pot to pretend she is cooking noodles.
I love my family. It’s amazing how much, we have all grown these past 12 years. God has really been good to us. I’m glad that he has provided for our every need, spiritual and physical.
Thankyou, Lord for all your blessings, especially my wonderful, precious family.
Like