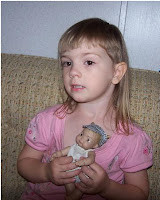 She told me, “Well, Ms. Lauwa has a horse and it’s a boy, and it has dog ears. Well, actually it has horsey ears, but it looks like doggy ears.”

Then I understood her meaning. Since boy dogs have dog ears, why can’t boy people have dog ears too? I’m not sure how that argument would hold up in a Logic and Argumentation class in Seminary but it works for her. It’s hard to argue with a 3 year old.