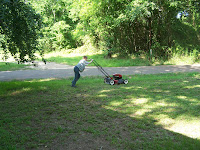 Our firstborn, Joshua, had a birthday about a week ago. He turned 10 years old. It’s amazing how time has gone by. On his birthday, I told him stories of his past birthdays. Starting from the day he was born. I remember so many of his milestones. I remember his first laugh, his first tooth. I also remember the first time he road his bike without training wheels. Then this past April, he had driven a four wheeler all by himself.
Today he had another milestone. This was his first time to mow our yard with a powered lawnmower. He had used a reel mower before, but this is his first with the gas powered lawnmower. I had told him in the past, when he begged me to let him mow, that he could mow when he was big enough to crank the mower with the pull string.
Yesterday, I was trying to decide which of the many chores I needed to do while the baby was asleep. Joshua was outside as I was contemplating mowing. He asked me as we were clearing out the large sticks, and toys out of the yard, if he could try to crank the lawnmower again. So I agreed. After making sure there was plenty of gas in the lawnmower, he pulled the cord. After just a couple of pulls it cranked right up.
I explained to him how to start with a straight line. I had him mow a straight line towards the window of our house. I then showed him how when he turned the lawnmower around there was a grass line. A line where the grass is tall verses the grass that is short. I showed him how to put the tire right on the outside of that line. He did a perfect job. I was so impressed by his hard work that I took several pictures. 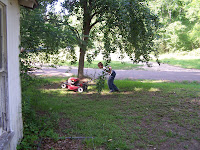 Looking at the picture above you can see how the lawnmower is as big as he is. So just imagine how much work it was for his small body. However when I asked him about half-way through our yard if he needed a break, he said “No, I can do it.” So I went and got him a drink, so that he would not get too hot. He mowed the majority of the grass that day. He came in hot and sweaty with a big grin on his face. My little boy, was able to do a man’s job. Where has the time gone?
Today, he told me that he had growing pangs, in his arms, legs, and hands. I explained that it was from all the mowing yesterday. He said, “But it feels like growing pangs.” I then told him that it was growing pangs. His muscles were growing from all the hard work they did yesterday.
Later on today, he came back to me, while his sisters were playing upstairs, and asked if he could mow the rest of the yard. I said, “Sure.” So out he went and I heard the lawnmower crank and start purring away outside.
I may have mown my last yard. From now on, my son will be taking on that roll. It won’t be long and his brother will be begging him to let him mow. I can see him telling Jonathan, “When you’re old enough to crank the mower, I’ll let you mow.” It won’t be long!
Psalm 144: 11-12 “Rid me, and deliver me from the hand of strange children, whose mouth speaketh vanity, and their right hand is a right hand of falsehood: That our sons may be as plants grown up in their youth; that our daughters may be as corner stones, polished after the similitude of a palace:
Like