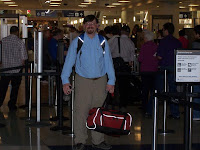 I took this picture of Scott right before he went through the security at the airport. My Dad took us over to the airport Monday and we watched as Scott went through the process of checking his luggage, and getting his tickets. Then we watched until we couldn’t see him any more. We did see that he passed through the security line without any problems, so I was glad that it all went smoothly. He called me from his plane in Florida, before the plane took off. That was Monday night and he said that he wouldn’t be able to call me on his cell phone after that. So I was glad he called and let me know he made it that far.

Then Tuesday evening he e’mailed me to let me know he had made it safely and would write more later. Which I also read a message that Bro. Barker, the missionary Scott is visiting wrote to say that Scott had arrived safely and they enjoyed him playing on his ukulele at a meeting in Paraguay. So I knew Scott was having a great time.

I talked to him on Skype this afternoon. He is doing well. He had preached at a prison in Paraguay and I think he attended another service. He will be preaching on the radio tomorrow. He will also be attending a Christmas Eve service in Paraguay. It will be a 4 hour long service. I can’t picture any services here in America running that long. I’m looking forward to his getting back with pictures and telling us more about what he is doing. We have 3 hours time difference. When it was 8 o’clock here it was midnight there. Tomorrow sounds like it will be pretty busy for him. He is starting the morning by going to the airport to pick up the luggage that was lost in transit. Thankfully he had all his personal items as carry-on. We are hoping there won’t be anything missing from his checked baggage. It was mostly items that we had bought for the missionary and his family.

The kids and I are doing well. My parents invited us to stay with them for the two weeks Scott is away. Monday night was the hardest for me. After I talked with him on the phone I felt sad, because I realized he really will be gone for two weeks and we hadn’t been apart that long before. Normally I would have gone with him rather than have to miss him for two weeks, but since I’m close to my 7th month of pregnancy I didn’t want to be that far away. I also knew Scott would have an easier time going from place to place without worrying about my health and keeping me comfortable. I guess if we keep busy enough maybe the time will pass quickly.

Tuesday night my parents took me and the kids to see the Christmas lights in Athens. They were really pretty. Then today we had Wednesday night service at my parents’ church. My parents even brought refreshments for everyone to enjoy fellowship after service. Tomorrow we will be having a Christmas Eve candlelight service. Also my sister and brother-in-law will be coming to visit us on Christmas Eve. So tomorrow should be pretty busy. And then of course we will have Christmas on Friday at my parents house. I’m hoping maybe Scott will be able to join us on Skype. That would be nice. I’m not sure exactly what they have planned for him that day. So I guess we will see.

Well, I was going to try to post two more pictures but for some reason my browser isn’t letting me. I guess I’ll just have to blog again tomorrow with those pictures. Maybe Blogger will cooperate better then. I hope everyone has a Merry Christmas Eve.

One Reply to “Scott’s in Paraguay”