Happy New Year! For my first post this year, I wanted to share some pictures of some of the things we did yesterday. 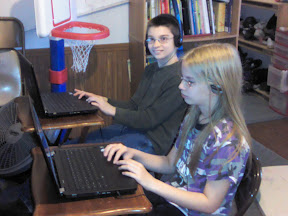 This first picture is Joshua and Ruth working on their computers. We found out about a really great website www.kahnacademy.org. It’s a great resource for learning all sorts of subjects. It’s free and the kids love learning with it because the lessons are interesting and they receive points and awards that we can keep track of. 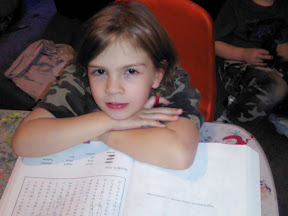 Even though she doesn’t look like it in this picture, Hannah really does like working in her workbook. The biggest realization she had with yesterday’s lessons was that word-find puzzles really aren’t as hard as she thought they were. She finished finding all the words today without any help. 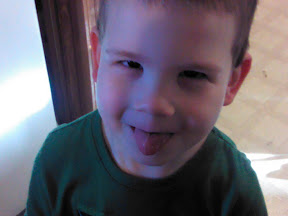 And this is the best picture I could get of Jonathan. He loves to be goofy and make funny faces for the camera. I have a hard time getting a serious picture with him. I guess he makes up for Hannah always making serious faces. Now if I could get them to meet somewhere in the middle for pictures. 🙂 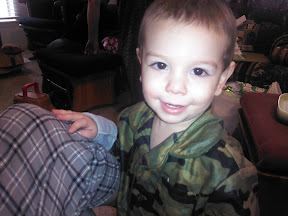 And Elijah wouldn’t stay still for a picture because of the flash, so I chose this picture of him from Christmas.
He spent most of our lesson time tackling Jonathan. Although Elijah did learn a major lesson yesterday.

I cooked pancakes for us to eat on our drive home from karate class. The kids were wanting to have some but I explained that they just had lunch and that I wanted to save the pancakes for later. Elijah kept asking and I told him a very infatic no. I was distracted for a few seconds typing something into my tablet when I looked up and saw that Elijah had stolen the big bowl of pancakes right from under my nose and was helping himself to them. I knew that I had to teach him real quick that what he did was wrong.

It’s hard sometimes as a mother to be firm with your children, when they are young and cute. I don’t like seeing my children cry, but I learned quite early on that if you allow wrong behavior when they are little, it only gets harder to teach them what is right when they are older. So to help myself teach my child, I imagine him doing the same crime as a teenager and I nip it in the bud while it is fresh on his mind and while he is still young enough to take me seriously.

He did pucker up and cry real tears of repentance because with his punishment, I explained in simple terms exactly what he did wrong. Then I removed the pancakes from his reach. I held him as he thought, in his young mind, about it. A little later he was showing me something he drew on a magna doodle and I smiled and really bragged on how good of a job he did. I could tell by how he approached me that he was making sure that he had been forgiven and that all was well between us.

Children learn so quickly at such a young age. That is why the Bible tells us to raise them up right while they are young.
This going to be a really good year of growth in our family.

This year will also be good in that we’ll be getting to find out whether we are having a girl or a boy this month, the baby is due at the end of May, and my brother and his family will be visiting us while on furlough from France. We’re going to finally get to have a family picture with my kids and our brand new baby, his 5 kids (one of whom I hand’t met in person yet), and my sister’s new baby will be in it.

I am so excited to see all the blessings unfold in 2012!

Proverbs 22:6 “Train up a child in the way he should go: and when he is old, he will not depart from it.”