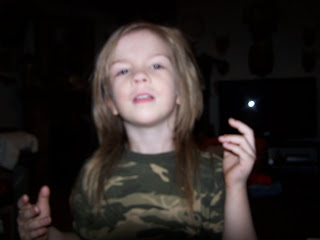 I’ve probably heard this question a billions of times (using another of Hannah’s favorite phrases).  Everything seems to be a billion with that girl.   I don’t know exactly how to break her of the habit of asking, “Can I tell you something?” before everything she wants to say.  And if anyone says, “No.”  She’ll stop and look at you like, “what do I do now?”  Usually the person that tells her no gives in and lets her tell them.

Here are some more pictures from our trip.  I wanted to post the pictures I have from our fishing trip. 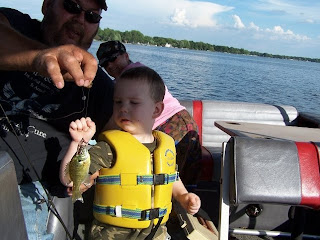 Jonathan caught his first fish with the help of Grandpa Art.  Jonathan was a little nervous of touching the fish, he wouldn’t even hold the string the fish is on for the picture. But the position his hand was in makes it look like he was holding it. 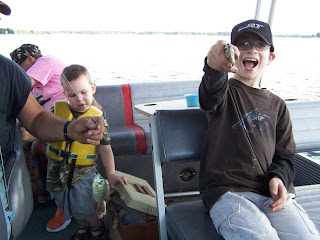 Joshua caught two or three fish.  He was the official fish carrier.  He would carry the fish that were keepers to the bucket and release the ones that were too small back into the bucket.  After we got back Grandpa Art taught him how to clean the fish. 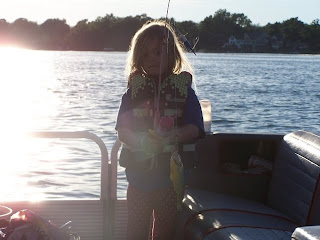 This is the only picture I could get of Hannah.  She was freaking out over the fish on her line and was demanding in a very shrieky voice that someone get that fish off her hook.  If you hadn’t guessed already she is our drama queen. 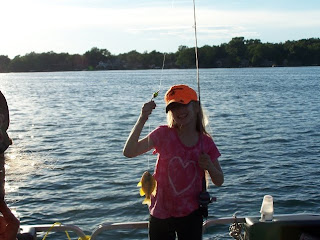 Ruth was the last to start catching fish.   She was getting disturbed by the fact and I told her that the fish probably knew that she wasn’t baiting her own hook.  She didn’t like touching the worms so we kept having to put the worm on for her.  I was a little tired of having to stop what I was doing to put a worm on her hook, so I told her that the first step in catching fish was to put the worm on your own hook.  She then got her nerve up and started baiting her own hook and sure enough she started catching fish.  In fact she probably caught the most.

I don’t know how well my fishing advice will go for anyone else but it seemed to work for her.  I think technically it was because she was able to get her hook in the water faster because she wasn’t having to wait on someone else to bait it for her. 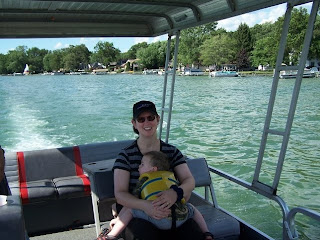 I normally wouldn’t put a picture of myself on my blog but Scott e’mailed me to tell me he was catching up on my blogs.  I know that he would want to see a picture of me too.  So this picture is more for him than anything.  But everyone else might like seeing Jonathan.  He was a bit nervous at first whenever Art would drive the boat around the lake.  So he wanted to be held the whole time.  He’ll say, “Hold you!” I’m finally starting to get him to say, “Hold me please.”  But it’s still a work in progress.
Speaking of Scott, I realized today as I was looking at his e-ticket that I had the wrong day to pick him up.  I thought I was going to be picking him up tomorrow morning at 5:25 a.m.  but it turns out being Wednesday morning at that time.  I’m glad I looked.  It was disappointing to see that it was going to be a day later, but it would have been worse to find out at the airport that I had the wrong day.
It won’t be long and we’ll all be together again.  I told the kids that it just gives us one more day to get the house in order before Daddy gets home.
Like