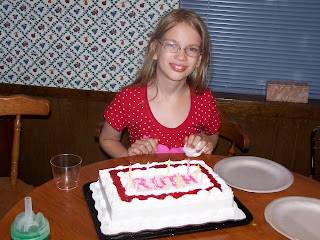 Today was Ruth’s 10th Birthday.  She had asked me as we were driving back to Texas from Michigan that we not have to drive on her birthday.  I told her that it all depended on how many times they asked to stop.  I did have to tease her yesterday once we arrived that on her birthday after she opened her presents we could all get in the van again and ride around town just for fun. But she didn’t seem to like that idea.

They were encouraged by me telling them how many hours were left along the way.  If we had driven straight through without any stops we could have made it to my parents house in 20 hours or so.  They were all excited that it could be that quick and all started agreeing that they would not ask to go to the restroom the whole trip.  I smiled and told them that we would see how long that lasted.

It didn’t last super long but they did pretty well.  Hannah would say, “Mom, can I tell you something? I won’t ask to stop anymore but I need to go to the bathroom just this once.”   When we got back to the car I would check the GPS and tell them the new arrival time if we didn’t stop.  They were pretty excited when we only had 4 hours to go.  If Scott had been here we probably would have opted to drive on through Thursday night while the kids were asleep.  But without the extra help driving I decided to stop Thursday night at a hotel.
The worst part of the trip was probably trying to find a hotel when we arrived in Texarkana on Thursday night.  I could have stopped at a hotel on the Arkansas side but I had wanted to get on into Texas that night.   I didn’t realize how bad the construction on the streets were there.  It was a mess and my GPS wasn’t any help.   I hate driving in construction at night.  I had planned on driving into Texarkana at 9:30 p.m. finding a hotel and then ordering a Pizza to be delivered on our last night in a hotel.  But I couldn’t find the hotel in my price range that I wanted.  It felt like I was driving in circles I was so turned around.  So after the headache of trying to figure out the mess I was in, I decided to drive out of town before finding a hotel.  Thankfully getting back on the main road wasn’t too hard and we drove to New Boston.  We arrived at a hotel about 10:30 that night and after getting everything inside the hotel, I tried calling Pizza Hut only to find that they had already closed.  I then decided to load the kids back into the car and go see if we could find a restaurant open.  Everything but the gas stations were closed.  So I bought a box of doughnuts and some peanut butter crackers for Supper.
I finally had the kids in bed by 12:30 a.m.  I was then able to check the internet and see if there was any news from Scott and took my shower and went to bed about 2:30 a.m.  I opted for sleeping late over free breakfast that morning.  We checked out of the hotel at 11 a.m. and only had 3 1/2 hours left to go.  Of course it turned into about 5 after stopping once or twice for restroom breaks and then stopping for feeding the baby and refueling the car.  We finally arrived safe and sound at my parents house.
Tomorrow we will go to my parents Church and hear my Dad preach.  Then Sunday afternoon, we will be heading out to visit my sister and then visit their church to hear her husband preach Sunday night.  Then from there we will head home and hopefully get things unpacked on Monday and get ready for Scott’s arrival early Tuesday morning.
I’m so glad that it’s that close to time for Scott to be back.  Three weeks is too long to be apart.  But I heard from him again today.  He called and said that they were dropping off two of the team members at the airport and then he would be heading back to visit the church in Chang Mai.  He told me that he wasn’t feeling too good. He had eaten something that didn’t set well with his stomache.   Please keep him in your prayers.  He told me that this was a really productive trip.  He was really impressed with the response of the people in the village they visited.  I’ll post more pictures from our trips over the next few days.
I want to post a couple of videos tonight in case I do not have a chance to blog tomorrow. After tomorrow I’ll be back on dial-up and can only post pictures. The first video is of Scott’s Aunt Shelby who was showing Jonathan how to blow bubbles at my Mother-in-law’s house.   In the second video my Dad was playing with Elijah.
Only two days and two nights left until I get to see Scott again!  Thanks for all your prayers.
Like