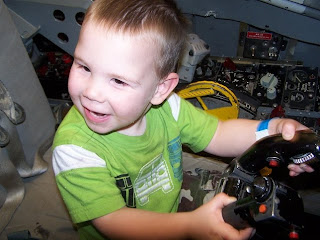 This is probably my favorite picture of Jonathan from our trip.  I took this picture of him at the Kalamazoo Air-zoo.  He loved being inside a real cockpit with real buttons and switches to push.

Joshua, I’ll only have to tell twice and he’ll be up and at ’em.  He’ll probably even help get the others up.

Ruth will be a challenge since she usually sleeps so soundly.  I anticipate having to tell her loudly severral times and then shake her shoulder, or threaten to tickle her feet to finally get her up and moving.

Hannah, I will come into the room and quietly and sweetly as possible tell her to wake up. There are two possible reactions I expect from her. She’ll either grumble and turn over covering her head with her pillow and then cry as I insist she get up, or she’ll jump out of bed and squeal excitedly because we’re going to get Daddy. .

Jonathan, I’ll probably have to carry out after trying to wake him up enough to at least go potty first.

Then Elijah should be the simplest to just feed and put in his car seat.  But I wouldn’t be surprised if he chose that time to have the dirtiest diaper of the week.  Watch them all surprise me and give totally different reactions than I am anticipating.  We shall see.  I’ll try to post again tomorrow if I get a chance.

One funny thing that from my confusion of Scott’s arrival was I had rescheduled Elijah’s 4 month check-up for Wednesday, thinking that we might be too tired from picking Scott  up on Tuesday.  Oh well maybe I’ll leave the kids at home to watch a movie or something while Scott rests.  It will be different taking only Elijah to the doctor.

This eveniung, I took the kids with me to the store to get some much needed groceries.  I found Hebrew National Beef Hot Dogs on sale for 75 cents a package.  That was 6.5 cents per ounce!  It was just about cheaper than the cheap stuff.  I bought just about every package they had.   I told the cashier that with a family our size you don’t pass up a good deal like that.

Now I need to wash some dishes and then get some sleep.  Scott’s flight will take him about 2 and a half to 3 hours to get all the way from Los Angeles to Houston.  It will take me a little over half that just  to drive to the airport.  Kind of funny isn’t it?

I’ll try to post an update sometime tomorrow about Scott’s arrival.  Thanks for all your prayers.