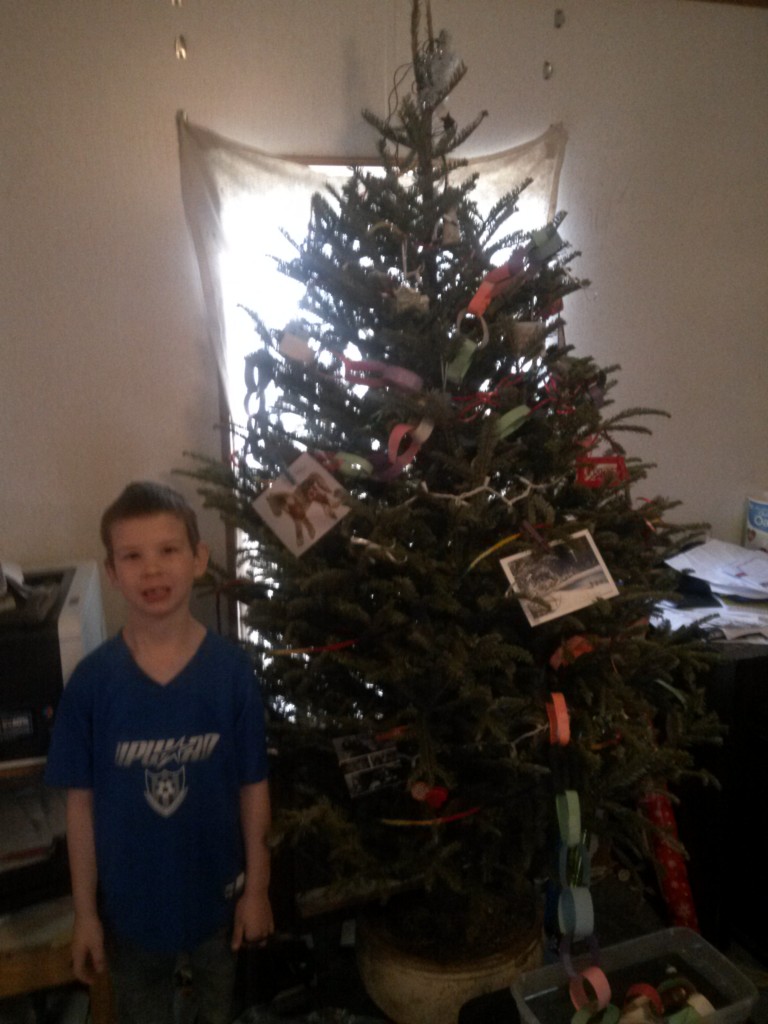 Each year starting in 2013 I have been choosing a word for the year. In fact it was a blog post by a fellow Tribe Writer called “Why you should have One Word for 2013” that got me started. Picking a theme word each year has really revolutionized my goal setting and how I keep up with it all.

I won’t bore you with all the details on how I’m not a list person and how before starting this method I gave myself way too many goals thus becoming overwhelmed and hardly accomplishing anything on the list at all. (Yes, I did just say all that in one breath!)

Now I pick one simple word. A word that all my goals and aspirations can snuggle up to and get comfortable with.

In 2013 my word was “Determined”. All that determination helped me get my writing off the ground. I finished my manifesto “Don’t Quit! Build a Legacy of Commitment“. Which you can download the pdf for free right here on my site. It was a really good year for my writing.

That year I wrote a post about how my Life is Like a Boat. Despite all my determination I still felt unbalanced. I decided maybe if I chose the word “Organize” for 2014 I would find that balance.

My family and I accomplished a lot in 2014. We got most of the house cleaned up. We traveled a lot without losing too many things. It was a very good organized year (at least organized for me). Even though things aren’t perfectly organized yet, it is better. I feel this past year was a successful year. We did so much more that we wouldn’t have done if I hadn’t even tried.

Now you are probably wondering about my word for 2015.

I struggled to decide on a word. I started thinking about it in December as I was trying to do last minute organizing. One of the things I need to work on is making sure I keep my priorities straight. It sounds very noble. Make a list of the things that are the most important and focus on those things this year. However I couldn’t put my finger on why I didn’t quite feel that word working for me. As I tried to write down some things that I wanted to do this year using “Prioritize” as my key word my goals just looked flat.

My husband and I had our children list some things they wanted to accomplish this year. They wrote some pretty good goals and some lofty ones that will take them a lot of work to accomplish. Most of them were very good goals and they can achieve them all if they work hard at it.

New Year’s Eve my husband and I sat down with the kids and talked with them about their goals. I told them that one of the things I would like to see this year are goals actually being accomplished. I told them that if they set out to do a project I want to see those projects finished this year not just started.

Then my word for 2015 hit me between the eyes…”Finish”. My children are not the only ones that need to finish things. Suddenly my mind went to all the unfinished projects I have laying around the house.

I look back on my life and realized that a lot of those unfinished projects stem from a problem in my mind. Somewhere in my life I got into the bad habit of assuming things weren’t going to get finished.

For way too long I have set myself up for failure.

I’m going to help the kids finish their projects as well. This year will be very productive and I’m going to keep a list of every project we finish.

I already know our Rock Solid Family will finish this New Year out strong.

How about you? Do you have some goals for this year? If you were to summarize them into one word, what would that word be? I can’t wait to hear from you. Please share your word for the year in the comments.

Right now? I am going to finish taking down that Christmas tree!

This week we have been working hard to get our house organized. We moved Elijah into the smaller bedroom with his brothers. We will be getting him a toddler bed soon and I wanted to get him used to the change of room before we change his bed.

In order to make it all work both the boys’ and girls’ rooms needed major work. There were clothes all over their floors. This hasn’t been a new problem. In fact I’ve had to go through their clothes fairly often. I decided we needed to go through them again and see if we could get a handle on the problem. 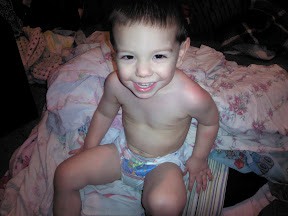 Elijah loves it when I try to organize clothes. Piles of clothes are mountains of fun to him.

We started off with sheets and blankets. I even had them take the sheets off their beds. I put those in piles. Twin size sheets and pillow cases in one pile, baby bed sheets in another pile, towels that somehow got into the mix in another pile and crochet blankets and quilts in yet another pile. I then got a basket and had them put their favorite set of sheets in it. I started that load to wash.

After getting that major work done, I had the kids take a break to work on their lessons.

The next day we started gathering the clothes off their floors. I’m still working on getting that organized. I have to figure out what fits them and what doesn’t. I’m automatically throwing away clothes that have holes. I hope to get done with this task before Spring Break next week. 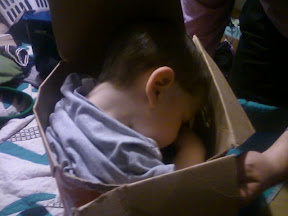 I want to share a couple of cute pictures from the past week or two. In the one above, Elijah had fallen asleep while playing in a small box. I took a quick picture before rescuing him from his cozy quarters and laying him in his bed. 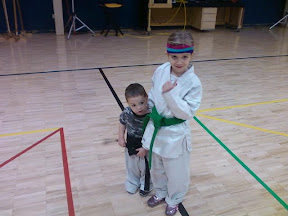 And this next picture, I took after karate class last week. Hannah is wearing her new green belt and Elijah is trying out a black belt that belongs to one of the students in our adult class. Elijah liked the belt so much that he almost wouldn’t part with it. 🙂 Maybe one day, he’ll earn one of his own that will fit him a little better.

Now to get back to work organizing. Maybe next week, I’ll be able to post pictures of nice, neat rooms.

The weather is finally starting to warm up. The cold front kind of caught us by surprise last week. All three of our children became sick last Wednesday. I was hoping it would be just a 24 hour virus or something. But they continued to be sick on Thursday as well. I didn’t get much sleep either of the nights and Thursday night, I decided that if they didn’t improve then I would take them to the doctor the next morning.

Well, after very little sleep, one hour before the Doctor’s office opened, I was praying that the kids could hold themselves together for one more hour. Well, they did and I loaded them all up into our 15 passenger van, and took them to the clinic. Of course, since it is a walk-in visit, we had to wait for a while. While we waited, we looked at magazines, I cleaned up after my middle daughter who spit up. Then I directed my son, to where he could go to the restroom.

The Doctor called in prescriptions for each of them. We then stopped by the laundry mat to see my sweet husband, who knew I hadn’t had time to do laundry all week. So he had gotten up early enough to go to the laundry mat, before he had to run off to work. I then took the kids to the house to let them all use the bathroom, get something to drink, and a light breakfast. Then we went back to the laundry mat to pick up the clothes.

On our return trip to the laundry mat, I smelled the van was overheating. So, I called my husband who had left for work and told him about the smell. I still needed to go to Wal-mart to pick the kids’ prescriptions. He said for me to just drive slow, and not push the van too hard.

While I was paying for the medicine at the pharmacy, my son, suddenly shrieked that he needed to go to the bathroom. Too late, it was already coming, the pharmacist’s assistant said that she would hold the medicine for us, and I rushed off with the kids to the bathroom, grabbing paper towels I found along the way for my desperate son. I felt so terrible for him. I’m not sure how embarrassed he really was, but I was embarrassed for him. He ran into the bathroom and I posted Ruth, at the door, to let him know, if he came out before I got back that I was getting him a change of clothes. She was a very willing guard. So I took the youngest with me to the van, I was so glad that we had just picked up clothes from the laundry mat.

Thankfully, my son changed, and we bagged up the dirty clothes, and went back to the pharmacy. The pharmacist gave me a run down of all the medicines, and I finally took the kids home. I have an index card system of who took what when. A tired pregnant mother can’t rely on her memory all the time. The system has been working and each child has been getting the right medicine at the right times so far.

Who says, being a mother isn’t exciting. Thankfully, after much prayer they are now feeling much better, and I’m finally getting some sleep.

Luke 5:31 And Jesus answering said unto them, They that are whole need not a physician; but they that are sick.