This is a guest post by my husband, Scott Maness. 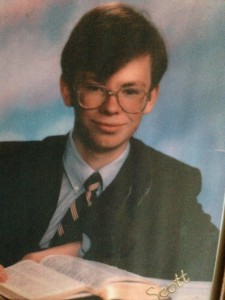 I grew up as an only child. For the first 3 years of my life I lived mostly on the road in a Tractor Trailer with my parents driving around the country. My dad left when I was about 3. He moved to a different state and I didn’t hear from him much growing up.

My step father moved in around 2nd Grade and married my mother a couple of years later. Even though things weren’t perfect there was at least some comfort in the normalcy. During my 7th and 8th grade years, I did well in school. I got really good grades.

My whole world was turned upside down the summer after my 8th grade year when my mom left my stepfather. My grades dropped excessively in 9th grade.  I was really confused. My whole world changed. For someone that doesn’t like things to change it was a nightmare. I didn’t know which way was up.

The first year after they separated I lived with my stepfather. After that I went to live with my mother and her boyfriend whom she later married.

In the middle of 10th grade I was saved at 16 years old. That was when everything really truly changed for me. I went from not caring to caring about everything.

I had thought about God in the past. I don’t remember a time that I did not believe in God. It was not a thing I ever questioned. It seemed logical. I didn’t know Him personally but it made sense that there was a God. However knowing that God existed didn’t put me in relationship with Him.

Around  7th grade I considered finding out more about God. There were times I thought about walking down to one of the nearby churches. I remember thinking about that because my step-dad made me memorize the ten commandments and some Catholic prayers. He basically told me that was all I needed to be right with God. He taught me to keep the 10 commandments and if that doesn’t work to use those prayers.

I had a Bible at the house. I knew there were answers in it but didn’t know where to find them. I would look at some passages and saw the topics in the back. I was seeking God. It wasn’t until I was 16 that I found what I was looking for.

My best friend at the time was going with his girlfriend to a little Baptist Church in my hometown. I spent the weekend at his house and went with him to church. I heard the preaching. The preacher spoke the exact words I needed to hear.

I heard the message that morning and was very convicted. I knew I needed to do something but wasn’t sure what it was. I went back for the evening services and heard the message again. At the end of the service when the invitation was given I turned to my equally lost friend and said, “What do I do?!”

My friend and I were like brothers and were competitive in just about everything. He wasn’t wanting to go to the front though. So he told me that during the song people went to the front.

I didn’t know what to expect or what was going to happen. I knelt down at the altar to pray and the preacher came and spoke with me. He showed me from the Bible exactly what I needed to do to be saved.

“For the wages of sin [is] death; but the gift of God [is] eternal life through Jesus Christ our Lord.” – Romans 6:23

“That if thou shalt confess with thy mouth the Lord Jesus, and shalt believe in thine heart that God hath raised him from the dead, thou shalt be saved. For with the heart man believeth unto righteousness; and with the mouth confession is made unto salvation.” – Romans 10:9-10

After turning from my sins and asking Jesus to forgive, I arose from the alter with a burden lifted. Everyone at the church was very excited and came to shake my hand. My friend came up to me  and said, “I hope you mean it!” He continued to go to church with me and later came to know the Lord as his Savior as well.

My family thought that my commitment to Christ was a passing fad. It wasn’t.

From that day forward I was committed to following Christ. I did not want to repeat the problems in my life. I didn’t want anything to do with broken relationships, drugs, alcohol, smoking. I didn’t want any of that. I wanted to put Jesus first in everything.

I began to study the Bible in earnest. I began asking lots and lots of questions about things I would read and began to seriously seek out the Lord’s will in my life.

When I was 18 years old I announced my call to the ministry and preached my first sermon. Soon after graduating High School, I packed all my belongings in my vehicle and went to Texas to go to Seminary.

I realized that I could not marry just anybody. She would need to be walking with the Lord also. We are not here on earth just to receive pleasure but to be servants of the King and to do His will.

Far too many people think of themselves and what they want to be happy. The Lord is not against our happiness but he is against our rebellion and disobedience. I was not in a hurry to find a wife. I had several things I was looking for. I was looking for someone that was going to love God more than me, who would be a good faithful mother, and would be willing to follow me anywhere the Lord led us.

Can you relate to my husband’s story? Was there something in your life that you chose to do different from the examples around you? We would love for you to share them with us in the comments or you may reply by email if you want to tell us your story privately. If you are not receiving my emails, you can find my contact information here. 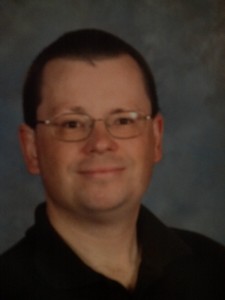 Scott Maness is a dedicated servant of God and minister of New Hope Missionary Baptist Church near Houston, Tx. He has a Bachelors of Theology Diploma from Texas Baptist Institute-Seminary. You can follow him on his blog at http://lighthouse117.blogspot.com and subscribe to his YouTube channel.

This is the 9th post in the series 31 Days Building Commitment. Check back tomorrow to find out how my husband kept himself from temptation while living on his own.