This is a continuation of yesterday’s post on Commitment While Single. Today I want to tell you about my life around the time I entered college. 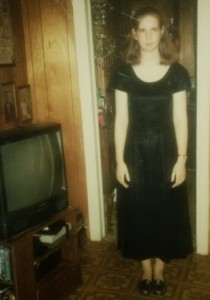 There was a time in my earlier years as a new Christian that I didn’t really listen to the preacher. But I’ll never forget the day that I started to actually hear what the preacher was saying.

The pastor’s wife taught one of my classes. The other students and I were talking with her after class. I remember saying something about the preaching taking so long.

She wasn’t angry. She simply smiled and told me said, “You know if you listen to what Bro. Davis is saying the service will go by faster. It won’t seem so long.”

Listening to the service? You mean instead of daydreaming and counting the people in the choir. We’re supposed to actually listen to the sermon. So that day began my real growth as a Christian.

In High School, I still went to church every Sunday, I taught in Vacation Bible School, and was very active in the youth group. I still didn’t go out with boys. Instead I stayed busy with Church and family activities.

My Dad was a deacon, youth director, and Sunday School teacher. Then my Senior year of High School my Dad announced his call to preach. That really rocked our simple uncomplicated lives.

Instead of going to just our church services every Sunday, sometimes my Dad was asked to preach for other churches. My Dad gave us children a choice whether we followed them or stayed going to our normal church. It would have been strange going to our church by ourselves so we followed Dad to his different appointments.

Then a small nearby church called my dad to pastor. My dad gave us the choice again. We could continue to go to the Church we grew up in or we could go with him and mom to the new church. We decided to go with our parents. This was another giant step in my growth as a Christian.

I was a teenager, just entering college when I became the teacher for the teens class. I wasn’t very good at it but I definitely grew from the experience.

I also became a teacher at church camp.  I was even asked to stand in front of 500 people to lead out during the testimonial time. Me the socially awkward one. And to top that off, when the director of the camp asked me to lead it, my dad pointed out that I would be the first girl to stand and speak in front of the camp. Before that day they only asked boys.

Even though I was a nervous wreck I felt that this was something God wanted me to do. Before I gave my personal testimony, I read the passage about the woman at the well. She was a woman willing to give her testimony of what God did for her and a whole city was saved.

I was committed to serving God. I didn’t need attention from boys to do what God wanted me to do.

As I entered college a list was beginning to form in my mind as to what I wanted in a husband.

I went to college and didn’t really know what degree I should graduate with. I decided to go with elementary education because I thought that might be helpful no matter where I lived. Although now I wish I had gone for a degree in journalism. But that’s another story.

To be honest the main reason I was going to college was  because I was hoping to meet a great guy there. I had lived an enclosed life though and didn’t realize how difficult it would be to find a man that met my high expectations.

I stayed faithful to seeking though. It was just when I was about to give up that my dad found a seminary student that he highly respected and kept telling me about.

Here is the thing. If I had been any different, if my list had been set at a lower standard, would I have met my husband? Would my dad have found Scott for me?

Probably not. I had to be faithful and committed to those high standards and to what God wanted even when I was about to give up. Right before I gave up, I let God step in. I put aside my embarrassment and let my dad set up a meeting with the man that would one day be my husband.

This is day 8 of 31 Days Building Commitment. Tomorrow I will share another guest post from my husband who will tell you his story of commitment while single.

2 Replies to “Commitment While a College Student”