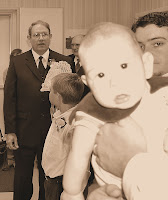 This evening, I felt Jonathan’s first tooth. I actually felt it earlier today but did not think as much of it until I told Scott about it. So he got out a flashlight and spent a good bit trying to get him to show his new tooth. Then with a cheerful excited voice he says, “Ahh!! Jonathan has a new tooth!”
My response, “Oh boy, Jonathan has a new tooth. A bit early don’t you think?” Which got us discussing our other children. Joshua didn’t have a new tooth until he was right at 1 year old. Ruth was about the same at about 1 year old. Hannah, I thought was early at 9 months old or so. However Jonathan has beat them all with a new tooth at 6 months and 3 weeks old, and yes I still intend to finish nursing him until he is 12 months old. Ahh! I hope this will not be a long 6 months!
Actually, he has been fairly good tempered about it. I would have not known he was getting a tooth if it had not been for all his drooling and my feeling it this afternoon. I’m just not exactly excited about the next 6 months of his tooth scratching me when I feed him. However, I’m sure I’ll get used to it after a month or so. I hope.
Anyway, I thought everyone would be excited to hear about his new tooth. I’ll definitely get a picture as soon as it’s big enough to show when he smiles. Right now you have to actually hold his mouth open to see it. So no pictures yet! But just keep checking back. I’m sure I’ll get some before too long!
Like